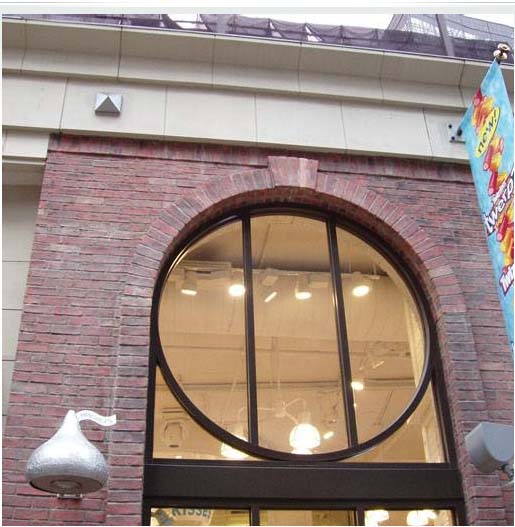 Located in one of the busiest and most famous commercial centers in the world, the Hershey’s store in Times Square has a quiet secret. The stressed, authentic brickwork is not actually made from bricks! Rather, it is made from a unique building material called GFRC (glass fiber reinforced concrete).

Project Challenges and the Stromberg Solution

In 2002, the architects who designed the Hershey’s store in Times Square were faced with a design question: how do you make an authentic, early 20th century building without the problems inherent to early 20th century building materials? Traditional bricks, though sturdy, are difficult to work with, and have a tendency to disintegrate over time. Moreover, they are heavy and require an equally heavy-duty foundation. These are major impediments to building a lasting structure in Times Square, but Stromberg Architectural had a solution: GFRC. GFRC bricks are lightweight, high impact, and will not swell, disintegrate or rot over time. However, despite these modern conveniences, they can be designed and installed to be a perfect facsimile to the real thing.

Traditional brick masonry is a complex, multi-staged process that requires expert bricklayers. Due to the specialized nature of the task, brick masonry can get expensive, quick. Not only is it expensive, but it is a timing sensitive craft. The bricks have to be cemented at exactly the right time in suitable weather conditions. This extra element of timing coordination is a logistical nightmare for foremen when they are trying to organize their jobsite. Bricks in GFRC from Stromberg Architectural are easily installed under any conditions. They do not require specialists to install, and they do not require special timing or any other coordination. This convenience is a relief, not only for your planner, but also your checkbook.

The Many Benefits of Glass Fiber Reinforced Concrete Nebraska, which has an economy that relies heavily on agricultural pursuits, does not have the plethora of architectural wonders found in states such as Nevada. The Nebraska State Capitol, however, which was constructed using Indiana limestone, is undeniably a marvel. Reflecting both Classical and Gothic styles, it features an impressive tower that is crowned with a dome and a figurative sculpture.

Stromberg Architectural can use GFRC to replicate the appearance of limestone, and to create architectural domes and intricately-detailed sculptures. We also have a knowledge of the conventions of many architectural styles, including Classical and Gothic. As such, we can use GFRC to create structures that have all the features of iconic buildings. Versatile and lightweight GFRC, however, allows such projects to be completed more quickly, and costs are typically lower as well.

Stromberg has completed a number of GFRC Nebraska projects, as well as others throughout the rest of the Midwest. Just one of our Nebraska GFRC projects was the work we completed for the Edward Zorinsky Federal Building in Omaha, Nebraska. This 432,000-square-foot structure is the place of employment for more than 1,200 federal workers.

Stromberg’s GFRC products aren’t just suitable for commercial and government structures. Our GFRC Midwest clients and commissions have also included churches, educational institutions, hospitality establishments, hospitals, and retail stores. We can expertly craft GFRC columns, GFRC brackets, GFRC fireplaces, and dozens of other elements that are suitable for both interior and exterior use.

You Can Buy GFRC From Stromberg Regardless of Where you are Located in Nebraska. We Offer:

For more information about your GFRC options, and to get GFRC ideas for your upcoming project, visit the Stromberg Architectural website. When you’re ready to take the next step, call us at (903) 454-0904 or fill out the contact form on our site to arrange a no-charge initial consultation.
Rachel Curling